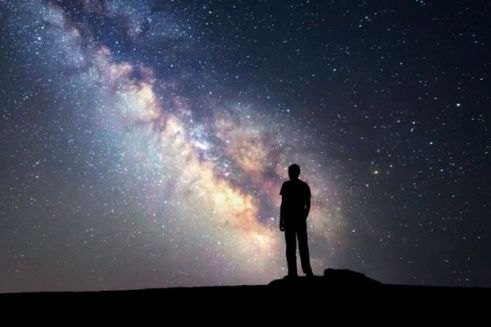 Since the beginning, people have looked up to the night sky with questions. Some of these questions are as old as Mankind, and others are relatively new, due to our recent, clearer scientific understanding of the way things work.

The Christian Holy Bible has answers to these great unsolved problems, including: “Why is there something, rather than nothing? How did life originate? What is the ultimate fate of Man, and the Universe?”

The Lord took care to guide the Scripture writers in knowledge that remains hidden to unbelievers. In this message, we identify the questions and explore the Biblical answers.

1. Why is there something rather than nothing?

Before the Big Bang, all of the laws of the Universe were set in place by the Lord. The universe was finely tuned for us. The degree of fine-tuning of these laws, at the quantum level, is difficult to imagine.

For example, the four key elements for life are Carbon, Hydrogen, Oxygen, and Nitrogen. A typical star produces these elements more than any other, with the exception of Helium. In other words, the Universe is engineered for promoting life!

In the beginning God created the heavens and the earth. (Genesis 1:1)

At the Human scale, all of the world seems solid to us. We sit on a chair, which is held in place on the floor. But, if we were to see the Universe with the Lord’s eyes, we would know that everything we see consists of only vibrations.

Each subatomic particle acts as a wave, and each atom is just a collection of waves. As solid as it appears, all of the Universe is only made up of vibration, frequency, and energy. The electron cloud that circles the atomic nucleus is just a wave. 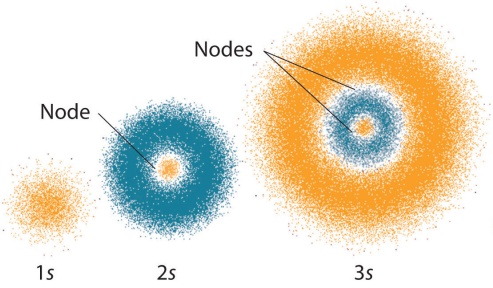 In other words, what we consider to be “something” is actually nothing – but vibrations in space-time. In the beginning was the Word – the VIBRATION is He who spoke everything into existence.

If we could stand outside of our Universe, we would see an expanding bubble that contains everything we experience:

The Lord told us about our expanding Universe from the very beginning. Over and over in the Holy Bible, the Lord speaks of “stretching out” the heavens:

A declaration of the Lord,
who stretched out the heavens,
laid the foundation of the earth,
and formed the spirit of man within him. (Zechariah 12:1)

2. How did life originate?

Now the earth was formless and empty, darkness covered the surface of the watery depths… (Genesis 1:2) 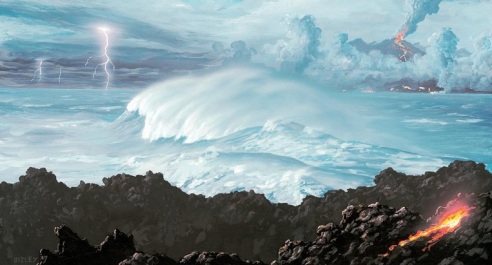 We know, from the fossil records, that life began in the Earth’s oceans.

The Genesis story describes an extinction level event, just like many that are documented to  have occurred in Earth’s history, including Noah’s flood. We don’t know what caused the event, but it could have been an asteroid or climate change. It could have been caused by a cosmic battle.

We do know, from the Genesis account, that the Lord had to quickly restore the Earth, so He could place Man there.

The first thing the Lord did was heal the waters – the Spirit of God was hovering over the surface of the waters.

Then, step by step, in six, 24 hour days, the Lord restored the Earth. Only the Creator can perform this miracle. The Holy Spirit showed Moses what actually happened, and he wrote an accurate account in the Book of Genesis:

Then God said, “Let there be an expanse between the waters, separating water from water.” So God made the expanse and separated the water under the expanse from the water above the expanse. And it was so. God called the expanse “sky.” Evening came and then morning: the second day. 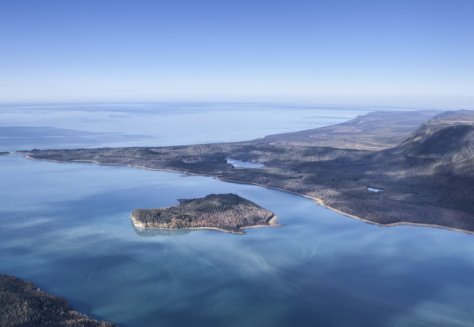 Then God said, “Let the water swarm with living creatures, and let birds fly above the earth across the expanse of the sky.” So God created the large sea-creatures and every living creature that moves and swarms in the water,according to their kinds. He also created every winged bird according to its kind. And God saw that it was good. So God blessed them, “Be fruitful, multiply, and fill the waters of the seas, and let the birds multiply on the earth.” Evening came and then morning: the fifth day. 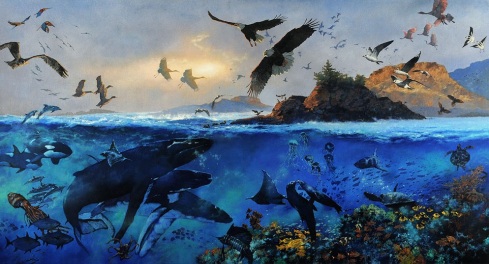 Then, He performed one additional act of creation:

So God created man in His own image; He created him in the image of God;
He created them male and female.

God blessed them, and God said to them, “Be fruitful, multiply, fill the earth,and subdue it. Rule the fish of the sea, the birds of the sky, and every creature that crawls on the earth.” God also said, “Look, I have given you every seed-bearing plant on the surface of the entire earth and every tree whose fruit contains seed. This food will be for you, for all the wildlife of the earth, for every bird of the sky, and for every creature that crawls on the earth—everything having the breath of life in it. I have given every green plant for food.” And it was so. God saw all that He had made, and it was very good. Evening came and then morning: the sixth day.

3. What is the ultimate fate of Man, and the Universe?

The Lord completes His plan for the Universe by joining with the Body of Christ. This includes our transfiguration at the Rapture.

As Christians, we know that God Himself became a man as Jesus Christ, took on man’s nature, lived, died, resurrected, and ascended as a man, and now is ruling in the heaven:

We should also know that we, as Christians, are heirs with Christ:

All those led by God’s Spirit are God’s sons. For you did not receive a spirit of slavery to fall back into fear, but you received the Spirit of adoption, by whom we cry out, “Abba, Father!” The Spirit Himself testifies together with our spirit that we are God’s children, and if children, also heirs—heirs of God and coheirs with Christ—seeing that we suffer with Him so that we may also be glorified with Him. (Romans 8:14-17)

When the time came to completion, God sent His Son, born of a woman, born under the law, to redeem those under the law, so that we might receive adoption as sons. And because you are sons, God has sent the Spirit of His Son into our hearts, crying, “Abba, Father!” So you are no longer a slave but a son, and if a son, then an heir through God. (Galatians 4:4-7)

The Bible uses our relationship as the Church with Jesus Christ as His “body” and His “bride”. These are symbolic designations for something so wonderful and beyond our comprehension that we can’t fully understand it at this time. The Body of Christ consists of individuals that are joined together to form the “body.”

Now as we have many parts in one body, and all the parts do not have the same function, in the same way we who are many are one body in Christ and individually members of one another. (Romans 12:4-5)

Don’t you know that your bodies are a part of Christ’s body? (1 Corinthians 6:15)

He uses the example of the human body to try to explain the concept of being an individual in Christ as well as a part of a larger “superorganism” – the Body of Christ:

Paul goes on to explain that the “head” of this “body” is Christ Himself:

And He personally gave some to be apostles, some prophets, some evangelists, some pastors and teachers, for the training of the saints in the work of ministry, to build up the body of Christ, until we all reach unity in the faith and in the knowledge of God’s Son, growing into a mature man with a stature measured by Christ’s fullness. Then we will no longer be little children, tossed by the waves and blown around by every wind of teaching, by human cunning with cleverness in the techniques of deceit. But speaking the truth in love, let us grow in every way into Him who is the head—Christ. From Him the whole body, fitted and knit together by every supporting ligament, promotes the growth of the body for building up itself in love by the proper working of each individual part. (Ephesians 4:12-16)

Paul also explains that the Gentiles have been included into the Body:

The Gentiles are coheirs, members of the same body, and partners of the promise in Christ Jesus through the gospel. (Ephesians 3:6)

Paul shows that the Rapture will be of the Body:

As a part of the Body of Christ, the Lord fulfills His promise to make all things new…

What “new” is included in His promise?

Our new spiritual bodies:
For our citizenship is in heaven, from which we also eagerly wait for the Savior, the Lord Jesus Christ, who will transform our lowly body that it may be conformed to His glorious body, according to the working by which He is able even to subdue all things to Himself.
(Philippians 3:20-21)

New Jerusalem:
Then I, John, saw the holy city, New Jerusalem, coming down out of heaven from God, prepared as a bride adorned for her husband. And I heard a loud voice from heaven saying, “Behold, the tabernacle of God is with men, and He will dwell with them, and they shall be His people. God Himself will be with them and be their God. And God will wipe away every tear from their eyes; there shall be no more death, nor sorrow, nor crying. There shall be no more pain, for the former things have passed away.” (Revelation 21:2-4) 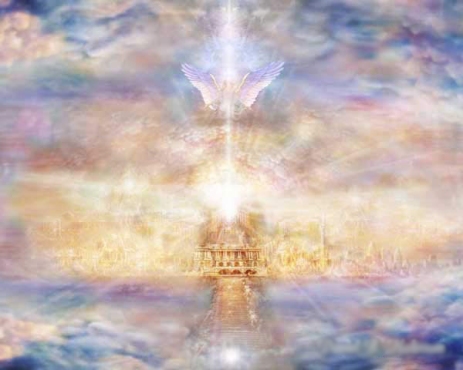 And so, even with all the troubles we are experiencing with the trauma of these End Times, we can look forward to our Transfiguration into a new, eternal life as the Body in the Lord’s kingdom!

We will rule the Universe with Christ!

Blessed be the God and Father of our Lord Jesus Christ, who according to His abundant mercy has begotten us again to a living hope through the resurrection of Jesus Christ from the dead, to an inheritance incorruptible and undefiled and that does not fade away, reserved in heaven for you, who are kept by the power of God through faith for salvation ready to be revealed in the last time. (1 Peter 1:3-5)