“Be on your guard, so that your minds are not dulled from carousing, drunkenness, and worries of life, or that day will come on you unexpectedly like a trap. For it will come on all who live on the face of the whole earth. But be alert at all times, praying that you may have strength to escape all these things that are going to take place and to stand before the Son of Man.” (Luke 21:34-36)

Because you have kept My command to endure, I will also keep you from the hour of testing that is going to come over the whole world to test those who live on the earth.  I am coming quickly. Hold on to what you have, so that no one takes your crown. (Revelation 3:10-11)

An astute observer of recent events can see the pieces of the End Times puzzle coming to a climax:

The Rise of the Beast / Antichrist

Venezuelan President Nicolas Maduro describes his close friend Turkish President Recep Tayyip Erdogan as a “leader of the new multipolar world.” Maduro has been enthusiastically tweeting Erdogan’s praises since July 8. Though Maduro may not be a good example of a statesman with wide international stature and prestige, his characterization of Erdogan is quite accurate. Erdogan’s July 9 inauguration might as well have been called a coronation with all the pomp that surrounded it. 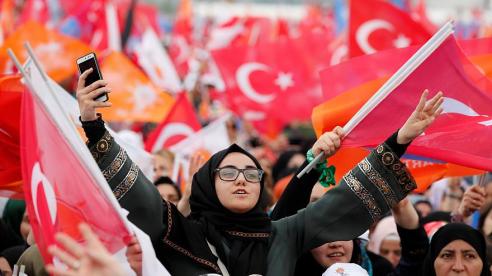 The introduction of the new presidential system marks the biggest overhaul of governance since the republic was established on the ruins of the Ottoman Empire nearly a century ago.

The post of prime minister has been scrapped and the president will now be able to select his own cabinet, regulate ministries and remove civil servants, all without parliamentary approval.

“Most powers will be concentrated in his hands, there will no longer be a prime minister, and almost none of the checks and balances of liberal democracies will be present. In other words, Turkey will be an institutionalised autocracy.”

Palestinians turn to Moscow for peace with Israel / Al-Monitor, July 13, 2018

Palestinian President Mahmoud Abbas is turning to Russia as he seeks to build a global coalition for Middle East peace after rejecting the United States as a credible partner. Abbas is scheduled to meet Saturday with Vladimir Putin in Moscow, his first trip abroad since being hospitalized for a lung infection last month. Their discussion will focus on creating a new multilateral mechanism for restarting collapsed peace talks with Israel, Palestinian Ambassador to Moscow Abdel Hafiz Nofal told the official Russian TASS news agency. The mechanism is expected to include the five permanent members of the UN Security Council (the United States, Russia, China, France and Great Britain).

Abbas adviser Nabil Shaath said this week that Beijing’s four-point initiative could serve as a substitute to US-led efforts. The Chinese plan, which was first outlined last year, calls for ending Israeli settlement construction, making East Jerusalem the capital of a Palestinian state based on 1967 borders, and for peace talks to resume. China plans to reintroduce the plan shortly, representative to the Palestinian Authority Guo Wei said Sunday.

Saturday night, July 14, the Israeli military announced nationwide IDF exercises would be conducted until the end of the week – an effective measure for placing the armed forces on the ready for war. The public was advised to expect unusual military traffic on the roads. This announcement appeared to conflict with earlier IDF assurances that large-scale tank and special units were standing by on the Gaza border ready for Hamas to further escalate the massive, continuous rocket barrage it launched against southern Israel as of Friday night (more than 100 rockets). A second large IDF force was on the ready on Israel’s northern border while Syrian, Hizballah and pro-Iranian troops were on the move in southwestern Syria and getting closer.

Survival of the richest: The wealthy are plotting to leave us behind / CNBC, July 11, 2018

Last year, I got invited to a super-deluxe private resort to deliver a keynote speech to what I assumed would be a hundred or so investment bankers. It was by far the largest fee I had ever been offered for a talk — about half my annual professor’s salary — all to deliver some insight on the subject of “the future of technology.”

After I arrived, I was ushered into what I thought was the green room. But instead of being wired with a microphone or taken to a stage, I just sat there at a plain round table as my audience was brought to me: five super-wealthy guys — yes, all men — from the upper echelon of the hedge fund world. After a bit of small talk, I realized they had no interest in the information I had prepared about the future of technology. They had come with questions of their own.

They started out innocuously enough. Ethereum or bitcoin? Is quantum computing a real thing? Slowly but surely, however, they edged into their real topics of concern.

Which region will be less impacted by the coming climate crisis: New Zealand or Alaska? Is Google really building Ray Kurzweil a home for his brain, and will his consciousness live through the transition, or will it die and be reborn as a whole new one? Finally, the CEO of a brokerage house explained that he had nearly completed building his own underground bunker system and asked, “How do I maintain authority over my security force after the event?”

The Event. That was their euphemism for the environmental collapse, social unrest, nuclear explosion, unstoppable virus, or Mr. Robot hack that takes everything down.

The super-rich are already planning their escape. What about the rest of us?

For you yourselves know perfectly that the day of the Lord so comes as a thief in the night. For when they say, “Peace and safety!” then sudden destruction comes upon them, as labor pains upon a pregnant woman. And they shall not escape. (1 Thessalonians 5:2-3)

The “birth pains” of the world are building and converging towards an unprecedented climax. There is an upcoming “delivery date” for the Rapture, known only to the Lord.

.
The time is running short. The Federal Union of European States is well on the way to being formed, with calls for much greater unification. This is the revived Roman empire detailed in Revelation 12 & 13.

We believe that the Beast (along with the Dragon), assisted by the False Prophet, will soon finalize the Israeli-Palestinian peace treaty, which will begin the dark 7 year period called the Tribulation. We believe that the Rapture will occur before then.

But God, who is rich in mercy, because of His great love with which He loved us, even when we were dead in trespasses, made us alive together with Christ (by grace you have been saved), and raised us up together, and made us sit together in the heavenly places in Christ Jesus, that in the ages to come He might show the exceeding riches of His grace in His kindness toward us in Christ Jesus. (Ephesians 2:4-7)

For I consider that the sufferings of this present time are not worthy to be compared with the glory which shall be revealed in us. For the earnest expectation of the creation eagerly waits for the revealing of the sons of God. For the creation was subjected to futility, not willingly, but because of Him who subjected it in hope; because the creation itself also will be delivered from the bondage of corruption into the glorious liberty of the children of God.

For we know that the whole creation groans and labors with birth pangs together until now. Not only that, but we also who have the firstfruits of the Spirit, even we ourselves groan within ourselves, eagerly waiting for the adoption, the redemption of our body.
(Romans 8:18-23)