Just as the microscope opened the world of the very small, and the telescope is used to form magnified images of distant objects, the new Temporalscope allows investigators to view past events. According to Dr. Maria Gordon, Imperial College: “This invention is as an offshoot of a classified U.K. project called Starlord, with the mission of developing technology-based remote viewing. This declassified breakthrough device allows an operator to view scenes from the past, with the use of a TimeTuner Helmet. It uses special Tesla capacitors to access the memory of the aethersphere, and the records are then decoded by neuromorphic processors. The photons are converted into pixels by vision-based organoid cells, which are then projected into the viewer.”

The first successful test of the Temporalscope was remote viewing a mail train pulling into a station in France, in 1896:

From that point, the temporalscope was set for events farther into the past. This is a view of Boulevard du Temple, Paris, in 1838:

With this technology, many of the claims of ancient writings have been confirmed, including the histories listed in the Holy Bible. GoogleFB is planning on organizing the entire history for online access.

Of course, the above article is science fiction, but the metaphor of a “Temporalscope” to view the past is not far off. Through Biblical archaeology, science has been confirming Bible claims.

The first biblical geographer (often called an archaeologist) was an American, Edward Robinson, who in the 1840s worked to identify biblical sites with extant ruins. 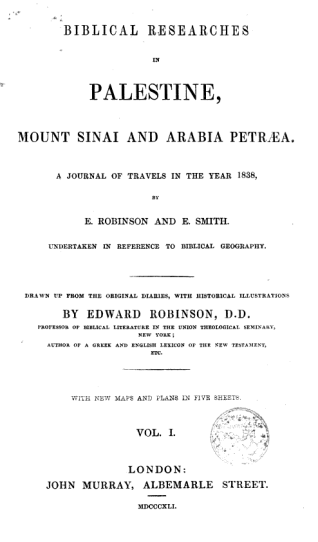 Archaeology is the scientific study of the material remains of people from the past. Archaeologists are interested in artefact morphology/typology (and evolution such as stone tool development) and cultural change.

The first step in an archaeological excavation is surveying the area.

This can be done either with remote sensing or direct visual observation. Archaeologists also use non-invasive techniques to survey sites known as remote sensing. There are many methods including aerial photography which is simply taking pictures from an airplane, hot air balloon or even a remote controlled drone; ground penetrating radar which is used to locate artifacts hidden below ground, and LIDAR, which uses lasers to scan the surface from the air through vegetation.

After archaeologists have thoroughly surveyed the site they begin excavation. They start by setting up a grid and connecting the grid to a datum. A datum is a fixed reference point, often one placed by the U.S.G.S.

The next step is to dig several test pits. Test pits are a small hole dug to determine the location, density and spread of artifacts.

Then archaeologists excavate the site using trowels, shovels, and various other tools. They carefully remove dirt and note the precise location of any artifacts found. The context of the artifact is just as important as the artifact itself, so the artifacts are always carefully mapped and documented.

The dirt removed from the site is screened to search for any small artifacts that may have been missed during the initial excavation.

Archaeologists also look for features while excavating a site. A feature is evidence of a human activity that is not movable, and usually has a vertical component. An aspect of a site that is only horizontal, such as a road, is not a feature. An example is a frequently used fire ring will leave evidence behind in the soil, but it cannot be moved with the occupants.

The artifacts are grouped with other artifacts of the same type. A type can be based on a variety of characteristics such as function or style.

Archaeologists also try to determine how old artifacts are. This can be done relative to other artifacts using stratigraphy-the idea that older artifacts are below newer ones.

Artifacts can also be dated using radiocarbon dating. This uses the decay of carbon and the ratio of C-12 to C-14 to determine the age of the artifact. It is only effective up to 68,000 years. It is also not very accurate for more recent artifacts.

Using all of the information about the artifacts, including context, typology, dating and more, archaeologists can piece together the events and culture of past society.

Biblical archaeology involves the recovery and scientific investigation of the material remains of past cultures that can illuminate the periods and descriptions in the Bible, from the Old Testament (Hebrew Bible) or from the New Testament, as well as the history and biblical cosmology of Judaism and Christianity.

The principal location of interest is what is known in the relevant religions as the Holy Land, which from a Western perspective is also called the Middle East. In contrast, Near Eastern archaeology deals with the Ancient Near East, or Middle East, without giving any special consideration to whether its discoveries have any relationship with the Bible.

The scientific techniques used are the same as those used in general archaeology, such as excavation and radiocarbon dating.

Some of the most significant discoveries in the field of biblical archaeology include:

The Dead Sea Scrolls (also the Qumran Caves Scrolls) are ancient Jewish religious manuscripts that were found in the Qumran Caves in the Judaean Desert, near Ein Feshkha on the northern shore of the Dead Sea in the West Bank. Scholarly consensus dates these scrolls from the last three centuries BC and the first century AD. The texts have great historical, religious, and linguistic significance because they include the second-oldest known surviving manuscripts of works later included in the Hebrew Bible canon.

The Tel Dan Stele is a fragmentary stele, discovered in 1993 in Tel-Dan by Gila Cook, a member of an archaeological team lead by Avraham Biran, the pieces having been used to construct an ancient stone wall that survived into modern times. The stele is in several pieces and contains several lines of Aramaic, closely related to Hebrew and historically a common language among Jews. The surviving inscription, which dates to 9th century BC, details that an individual killed Jehoram, the son of Ahab, king of Israel and the king of the house of David. These writings corroborate passages from the Bible, as the Second Book of Kings mentions that Jehoram, also Joram, is the son of an Israelite king, Ahab, by his Phoenician wife, Jezebel. Applying a Biblical viewpoint to the inscription, the likely candidate for having erected the stele is Hazael, an Aramean king, whose language would have been Aramaic, who is mentioned in Second Book of Kings as having conquered the Land of Israel, though he was unable to take Jerusalem.

Ketef Hinnom is an archaeological site southwest of the Old City of Jerusalem, adjacent to St. Andrew’s Church, now on the grounds of the Menachem Begin Heritage Center. It is located where the Valley of Rephaim and the Valley of Hinnom meet, on the old road from Jerusalem to Bethlehem. The site consists of a series of rock-hewn burial chambers based on natural caverns. In 1979, two tiny silver scrolls, inscribed with portions of the well-known Priestly Blessing from the Book of Numbers and apparently once used as amulets, were found in one of the burial chambers. The delicate process of unrolling the scrolls while developing a method that would prevent them from disintegrating took three years. They contain what may be the oldest surviving texts from the Hebrew Bible, dating from the First Temple period around the late 7th to early 6th century BC prior to the Babylonian Exile, and are now preserved at the Israel Museum. 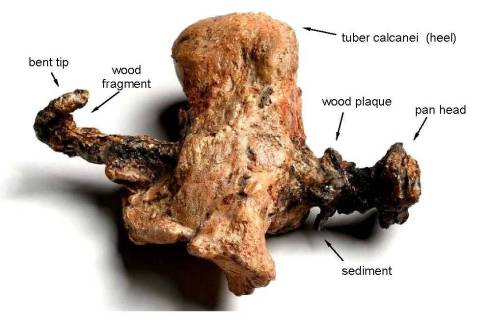 Archaeologically, the most important piece of evidence for Roman crucifixion is the heel bone of the crucified man. While many authors wrote about crucifixions (Josephus, Plautus, Senneca), with the discovery of a heel bone of a crucified victim – nail still embedded in it – scholars were able to analyze the Roman form of execution first-hand.

In 1968, a construction crew with the Israeli Ministry of Housing was working at an area in northeast Jerusalem when they accidentally dug up several tombs. Archaeologists who were called discovered numerous ossuaries, including one that contained the bones of an adult male who had been crucified. His name, Jehohanan (Yehohanan), was inscribed on the outside of the bone box, and his right heel bone still contained the rusted spike from his crucifixion. An analysis of the heel bone and the nail dated them to the first century AD, and revealed that Jehohanan had likely been crucified with a leg on either side of the cross and the nail driven in sideways through his heel. The bones of Jehohanen also bore evidence that his legs may have been broken. 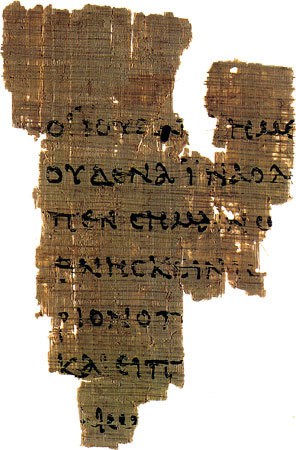 The Rylands Library Papyrus P52, also known as the St John’s fragment, is a fragment from a papyrus codex. The dating of the papyrus is a range of 100–150 AD. The front contains parts of seven lines from the Gospel of John 18:31–33, in Greek, and the back contains parts of seven lines from verses 37–38. P52 is generally accepted as the earliest extant record of a canonical New Testament text.

Finds of early Christian papyri from Egypt represent the earliest surviving indisputable physical evidence for Christianity and the Christian Gospel. P52 is sufficient to provide early witness to a number of key historical claims about the Historical Jesus, albeit that it does not include his actual name. But in these verses we find a man tried before the Roman authorities at a specific date (the governorship of Pontius Pilate), at a specific place (the Praetorium in Jerusalem), sentenced to a specific death (crucifixion), and all at the instigation of the Jewish Temple authorities.

The Pilate stone is a block of carved limestone with a partially intact inscription mentioning, Pontius Pilate, a prefect of the Roman province of Judaea from AD 26 to 36. It was discovered at the archaeological site of Caesarea Maritima in 1961. The artifact is particularly significant because it is an archaeological find of an authentic 1st-century Roman inscription mentioning the name “[Pont]ius Pilatus”. It is contemporary to Pilate’s lifetime, and accords with what is known of his reported career. In effect, the inscription constitutes the earliest surviving, and only contemporary, record of Pilate, who is otherwise known from the New Testament, the Jewish historian Josephus and writer Philo, and brief references by Roman historians such as Tacitus. 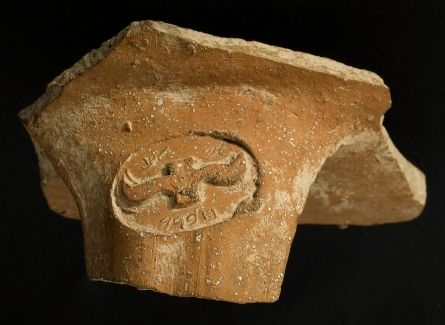 On July 22, 2020, a stunning announcement was reported by the Jerusalem Post about a new archaeological discovery by the Israel Antiquities Authority (IAA) in Arnona near the US Embassy in Jerusalem.

It was the uncovering of a vast administrative center in Judea built during the reign of King Hezekiah with seals attesting to the ancient Jewish presence during the First Temple period between the eighth and the middle of the seventh century B.C.E. IAA archaeologist Benyamin Storchan noted:

“We found about 120 stamped seal impressions on jar handles written in ancient Hebrew script, which translate as ‘belonging to the king.’ These stamped jars were usually related to tax collection. Up to this day, 1,000 similar items have been found in over a century of excavations in Israel, which gives us an idea of the importance of this area”.

Although it is not possible to verify every incident in the Bible, the thousands of discoveries of archaeology since the mid-1800s have demonstrated the reliability and plausibility of the Bible narrative. We don’t need a Temporalscope to see for ourselves the historical accuracy of the Bible!

One thought on “The Temporalscope: Science Confirms Bible Claims”