The Lord said to Moses and Aaron in the land of Egypt: “This month is to be the beginning of months for you; it is the first month of your year. Tell the whole community of Israel that on the tenth day of this month they must each select an animal of the flock according to their fathers’ households, one animal per household…You are to keep it until the fourteenth day of this month; then the whole assembly of the community of Israel will slaughter the animals at twilight. They must take some of the blood and put it on the two doorposts and the lintel of the houses where they eat them. They are to eat the meat that night; they should eat it, roasted over the fire along with unleavened bread and bitter herbs… Here is how you must eat it: you must be dressed for travel, your sandals on your feet, and your staff in your hand. You are to eat it in a hurry; it is the Lord’s Passover.

“I will pass through the land of Egypt on that night and strike every firstborn male in the land of Egypt, both man and beast. I am Yahweh; I will execute judgments against all the gods of Egypt. The blood on the houses where you are staying will be a distinguishing mark for you; when I see the blood, I will pass over you. No plague will be among you to destroy you when I strike the land of Egypt. (Exodus 12:1-13)

The Jewish holiday of Passover commemorates the Exodus from Egypt. God, seeing the blood, will then “pass over” the houses of the Israelites (Exodus 12:13), while smiting the Egyptians with the tenth plague, the killing of the first-born sons. According to standard biblical chronology, this event would have taken place at about 1,300 BC.

Then the Day of Unleavened Bread came when the Passover lamb had to be sacrificed. Jesus sent Peter and John, saying, “Go and prepare the Passover meal for us, so we can eat it.”

“Where do You want us to prepare it?” they asked Him.

“Listen,” He said to them, “when you’ve entered the city, a man carrying a water jug will meet you. Follow him into the house he enters. Tell the owner of the house, ‘The Teacher asks you, “Where is the guest room where I can eat the Passover with My disciples?”’ Then he will show you a large, furnished room upstairs. Make the preparations there.”

So they went and found it just as He had told them, and they prepared the Passover. (Luke 22:7-13) 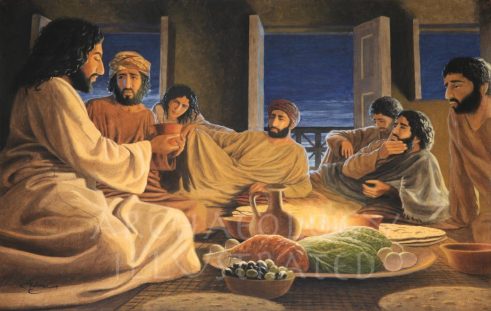 Over the centuries, the Passover meal became highly ritualized. By the time period of Jesus and His disciples, it was divided into four parts. First, the preliminary course consisted of a festival blessing (Kiddush) spoken over the first cup of wine, followed by the serving of a dish of herbs. The second course included a recital of the Passover narrative and the “Little Hallel” (Psalm 113), followed by the drinking of the second cup of wine. The third course was the main meal, consisting of lamb and unleavened bread, after which was drunk the third cup of wine, known as the “cup of blessing.” The Passover climaxed with the singing of the “Great Hallel” (Psalms 114-118) and the drinking of the fourth cup of wine.

When the hour came, He reclined at the table, and the apostles with Him. Then He said to them, “I have fervently desired to eat this Passover with you before I suffer. For I tell you, I will not eat it again until it is fulfilled in the kingdom of God.” Then He took a cup, and after giving thanks, He said, “Take this and share it among yourselves. For I tell you, from now on I will not drink of the fruit of the vine until the kingdom of God comes.”

Scholars agree that the first cup is the Kiddush, which means sanctification. With this cup, they begin the Passover seder. The second cup is called the cup of plagues. The third cup is the cup of blessing. The fourth cup is often called hallel, which means praise. The Four Cups represent the four expressions of deliverance promised by God: “I will bring out,” “I will rescue,” “I will redeem,” and “I will take.”

They also relate to four worlds: this world, the Messianic age, the world at the revival of the dead, and the world to come.

Note that Jesus did not drink of the fourth cup. Instead, He drank of another cup, the cup of the wine of wrath:

This is what the Lord, the God of Israel, said to me: “Take this cup of the wine of wrath from My hand and make all the nations I am sending you to, drink from it. (Jeremiah 25:15)

Jesus the Messiah voluntarily took upon Himself all of the wrath of God, knowing He would have to taste all of the judgement for the sins of the world:

Then Jesus came with them to a place called Gethsemane, and He told the disciples, “Sit here while I go over there and pray.” Taking along Peter and the two sons of Zebedee, He began to be sorrowful and deeply distressed. Then He said to them, “My soul is swallowed up in sorrow —to the point of death. Remain here and stay awake with Me.” Going a little farther, He fell facedown and prayed, “My Father! If it is possible, let this cup pass from Me. Yet not as I will, but as You will.” (Matthew 26:36-39)

The Lord knew that He, the Lamb of God, would soon be taking all of the wrath meant for us. Jesus is the fulfillment of the Passover. He is the Lamb of God, sacrificed to set us free from bondage to sin. (John 1:29; Psalm 22; Isaiah 53) The blood of Jesus covers and protects us, and his body was broken to free us from eternal death (1 Corinthians 5:7).

He took of the cup of wrath, so that we all could drink of the fourth cup: the cup of hallel, of the world to come, so He could take us as His people. His act makes us His body, His bride.

Passover marks the beginning of the New Year, according to the Lord’s command: The Lord said to Moses and Aaron in the land of Egypt: “This month is to be the beginning of months for you; it is the first month of your year. (Exodus 12:1)

Is it possible that the long expected Rapture – the “world to come” – will take place soon? Could this be our exodus?

Interestingly, in modern Judaism the Song of Solomon is read on the Sabbath during the Passover, which marks the beginning of the grain harvest as well as commemorating the Exodus from Egypt. 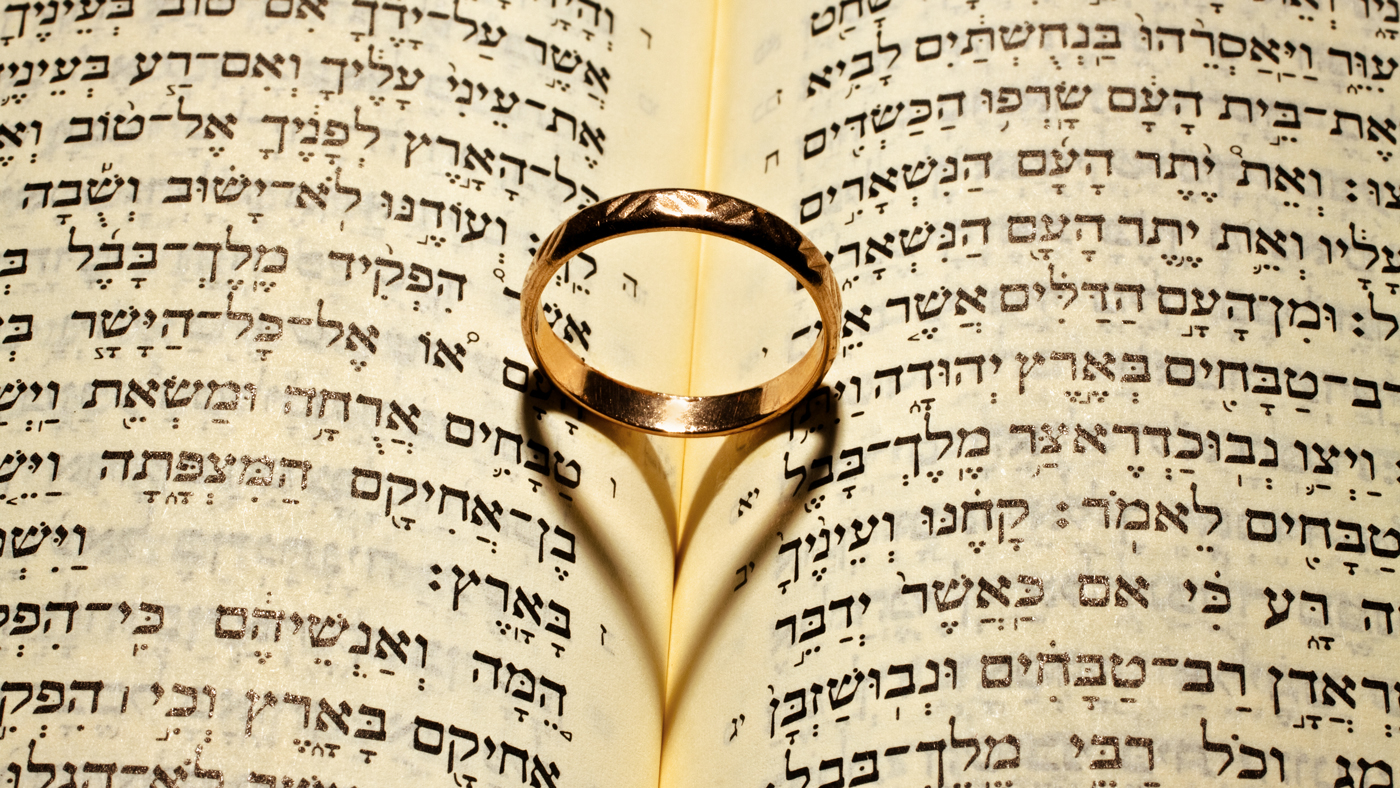 My love calls to me:

Song of Solomon chapter 2, verses 8-14, is an amazing picture of Jesus Christ coming to snatch His Bride up and away from off the Earth in the Rapture:

My dove, in the clefts of the rock,
in the crevices of the cliff,
let me see your face,
let me hear your voice;
for your voice is sweet,
and your face is lovely. (Song of Solomon 2:8-14)

Note that the bride’s beloved is pictured as being above her, as if He was coming down to get her:

“Listen! My love is approaching.
Look! Here he comes,
leaping over the mountains,
bounding over the hills.” Song of Solomon 2:8 (KJV)

He is looking at her “through the lattice” located “behind our wall”, which is exactly where Jesus is when He comes to get us. He is veiled to the rest of the world, but He is clearly visible to us.

He does not come down to get the Bride, rather He causes her to “rise up” and “come away” with Him:

“For the Lord Himself will descend from heaven with a shout, with the archangel’s voice, and with the trumpet of God, and the dead in Christ will rise first. Then we who are still alive will be caught up together with them in the clouds to meet the Lord in the air and so we will always be with the Lord. Therefore encourage one another with these words.” (1 Thessalonians 4:16-18)

“After this I looked, and there in heaven was an open door. The first voice that I had heard speaking to me like a trumpet said, “Come up here, and I will show you what must take place after this.” Revelation 4:1 (KJV)

He who testifies about these things says, “Yes, I am coming quickly.” (Revelation 22:20)

The message was excellent Thanks for all your hard work putting it together!

I DID read your post this time. Because I’m paranoid 2022 is the year. From Passion Week and Ascension Day, all the way until somewhere in September is the middle of the second heptad timeline, (plus 40 days).

Reading that Song of Solomon Script was giving me the goosebumps.

He does not come down to get the Bride, rather He causes her to “rise up” and “come away” with Him:

“For the Lord Himself will descend from heaven with a shout, with the archangel’s voice, and with the trumpet of God, and the dead in Christ will rise first. Then we who are still alive will be caught up together with them in the clouds to meet the Lord in the air and so we will always be with the Lord. Therefore encourage one another with these words.” (1 Thessalonians 4:16-18)

“After this I looked, and there in heaven was an open door. The first voice that I had heard speaking to me like a trumpet said, “Come up here, and I will show you what must take place after this.” Revelation 4:1 (KJV)
​
Same thing they said to the two witnesses in Revelation 11.

“Then they heard a loud voice from heaven saying to them, “Come up here.” And they went up to heaven in a cloud, while their enemies looked on.
​
That about sums it up.

There’s more than one reason why we need to meet the Lord in the air.

I love your articles. May the Lord continue to richly bless you with all wisdom and knowledge.

Or enter a custom amount

Your contribution is needed and appreciated!!!

Your contribution is appreciated.

Your contribution is appreciated.

One thought on “Passover: the Fourth Cup and our Exodus”