“Then there will be signs in the sun, moon, and stars; and there will be anguish on the earth among nations bewildered by the roaring sea and waves. People will faint from fear and expectation of the things that are coming on the world, because the celestial powers will be shaken. Then they will see the Son of Man coming in a cloud with power and great glory. But when these things begin to take place, stand up and lift up your heads, because your redemption is near!” (Luke 21:25-28)

The Northern Hemisphere is facing an onslaught of hurricanes and typhoons, seemingly overnight. With three storms spinning in the North Atlantic — Hurricane Florence one of them — the tropics have exploded to life at the peak of the annual season. At the same, in the tropical Pacific, Super Typhoon Mangkhut is the most intense tropical cyclone in the world, packing 170 mph winds.

Why the remarkable uptick in activity? In the Atlantic, in particular, it’s all thanks to a sudden alignment of the two things that fuel hurricanes: energy and wind…

What does this all mean in terms of climate? The answer is unclear. There is research to suggest that the number of storms that develop will not change significantly as a result of climate change. Instead, there is a likelihood that those that develop could become increasingly strong. Regardless, one thing is clear: What’s happening in the tropics worldwide right now is out of the ordinary.

At least two people have been killed by Typhoon Mangkhut, known locally as Ompong, which slammed into the Philippines early Saturday morning, bringing ferocious gale-force winds and pounding rains.

Both victims were women, killed when a rain-drenched hillside collapsed on them, according to the French news agency AFP. Mangkhut, the strongest storm of 2018 so far made landfall on the northern tip of the island of Luzon, at about 1:40 a.m. local time. 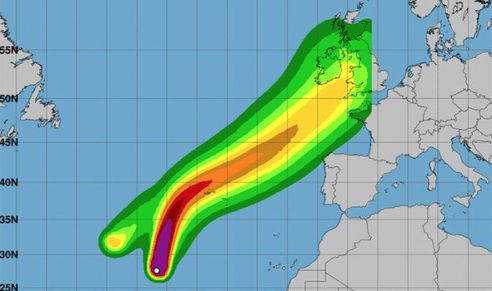 UK weather forecast: Met Office warns of ‘danger to life’ as Storm Helene set to batter Britain with winds of up to 80mph / EveningStandard, September 15, 2018

Forecasters have warned of “danger to life” as ferocious winds from Storm Helene are set to bring heavy rain and power outages to the UK next week.

The Met Office today issued a yellow “severe” weather warning, which said that flying debris could kill and injure.

It warned people to be “extra cautious while out and about”.

Winds could reach speeds of up to 80mph, forecasters said on Friday.

The storm is set to hit the north-west and south-west of England, as well as Wales and the Republic of Ireland, between 6pm on Monday and noon on Tuesday.

What makes this particularly prophetic is the world’s role in the dividing of Israel to please the Arab nations. The American President’s have repeatedly tried to forge a comprehensive Middle East peace agreement, and many other nations are working on their own plans.

Speaking in the Jordanian capital of Amman as he wrapped up the Middle East leg of his first overseas trip as America’s top diplomat, Pompeo called on the Palestinians to return to long-stalled peace talks with Israel. He said the United States is open to a two-state solution to the conflict if both parties agree, calling it a “likely outcome.” 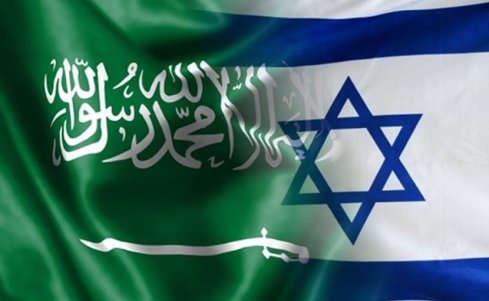 Most important is to establish a new regional alliance, based on the Arab Peace Initiative first proposed by Saudi Arabia in 2002 that is still valid until today. It would actually be a defense treaty between Saudi Arabia, Egypt, the United Arab Emirates, Jordan and Israel. Its strategic goal would be building a military and technological shield against Iran. It would develop and produce a Star Wars-like project much like President Ronald Reagan’s to forestall and pre-empt the Iranian ballistic nuclear arsenal; this would be the result of scientific and financial cooperation among the member states. This new alliance will have additional defensive tasks in thwarting terrorism and subversion in the Middle East.

To be clear, this indispensable alliance will never be built if the two-state solution is not fully implemented. A clear conclusion from all my meetings across the region in recent years is that there is no Arab leader — no matter how fearful of Iran — who would agree to stand under a defense umbrella with Israel absent this solution, thereby abandoning the Palestinian cause. The solution is a Palestinian sovereign state, in the approximate 1967 borders, demilitarized, with East Jerusalem as its capital.

“Our peace plan won’t be the Bibi plan. It will be fair, balanced, realistic and fitting,” the report quoted a US official as saying, referring to Prime Minister Benjamin Netanyahu.

The sources told the network there will be parts of the plan — which has yet to be unveiled — that both Israel and the Palestinians won’t like.

Palestinians turn to Moscow for peace with Israel / Al-Monitor, July 13, 2018

Palestinian President Mahmoud Abbas is turning to Russia as he seeks to build a global coalition for Middle East peace after rejecting the United States as a credible partner. Abbas is scheduled to meet Saturday with Vladimir Putin in Moscow, his first trip abroad since being hospitalized for a lung infection last month. Their discussion will focus on creating a new multilateral mechanism for restarting collapsed peace talks with Israel, Palestinian Ambassador to Moscow Abdel Hafiz Nofal told the official Russian TASS news agency. The mechanism is expected to include the five permanent members of the UN Security Council (the United States, Russia, China, France and Great Britain).

Abbas adviser Nabil Shaath said this week that Beijing’s four-point initiative could serve as a substitute to US-led efforts. The Chinese plan, which was first outlined last year, calls for ending Israeli settlement construction, making East Jerusalem the capital of a Palestinian state based on 1967 borders, and for peace talks to resume. China plans to reintroduce the plan shortly, representative to the Palestinian Authority Guo Wei said Sunday.

The Arab-Israeli Peace Initiative (or covenant) will be signed one way or another, and it will revolve around an initial 7 year security agreement.

is a sad fact that every time the United States tries to appease the Arab and Muslim nations and give away Israel’s land, disaster strikes. Since 1979, the efforts of a U.S. President to diminish Israel have caused such judgments as the Three Mile Island accident, the “Perfect Storm”, Hurricane Andrew, the Northridge earthquake that hit southern California, Hurricane George, multiple huge tornado clusters, Katrina, and a half-mile wide EF-5 multiple-vortex tornado that ripped through Joplin, Missouri. 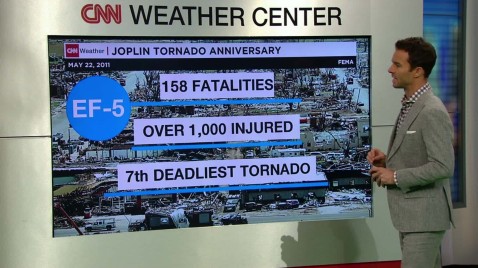 What could happen next?

The the roaring sea and waves are indeed a “sign of Jonah” – a prophetic warning to the people of the world. This month is for observant Jews to begin a self-examination and repentance, a process that leads to Rosh Hashanah and ends with the holiday of Yom Kippur.

The shofar is traditionally blown each morning for the entire month of Elul, the month preceding Rosh Hashanah. The sound of the shofar is intended to awaken the listeners from their “slumbers” and alert them to the coming judgment.

Rosh Hashanah is the Jewish New Year. It is the anniversary of the creation of Adam and Eve, and a day of judgment and coronation of God as king. 3 books are opened, the book of life, for the righteous among the nations, the book of death, for the most evil who receive the seal of death, and the third book for the ones living in doubts with non-evil sins. The final judgment is not done before the start of Yom Kippur. It is sometimes possible to receive the seal of life by asking for forgiveness.

The 30 days to Rosh Hashanah, and the 10 days leading up to Yom Kippur equal 40 days. According to Jewish tradition, the month of Elul is the time that Moses spent on Mount Sinai preparing the second set of tablets after the golden calf incident (Ex. 32; 34:27-28). Elul marked the beginning of a period of 40 days that Moses prayed for God to forgive the people for worshiping the golden calf.

What does the name of the month Elul mean? Elul has been interpreted as an acronym, with its Hebrew letters “Aleph,” “Lamed,” “Vav,” “Lamed” representing the words “Ani L’Dodi V’Dodi Li” (Song of Songs 6:3). These words mean “I am my Beloved’s and my Beloved is mine” and herein “my Beloved” refers to God, and “I” refers to His people. God wants us to become His beloved sons so that we can enjoy sweet communion and fellowship with Him.

Then the word of the Lord came to Jonah a second time: “Get up! Go to the great city of Nineveh and preach the message that I tell you.” So Jonah got up and went to Nineveh according to the Lord’s command.

Now Nineveh was an extremely large city, a three-day walk. Jonah set out on the first day of his walk in the city and proclaimed, “In 40 days Nineveh will be demolished!” The men of Nineveh believed in God. They proclaimed a fast and dressed in sackcloth—from the greatest of them to the least.

When word reached the king of Nineveh, he got up from his throne, took off his royal robe, put on sackcloth, and sat in ashes. Then he issued a decree in Nineveh:

By order of the king and his nobles: No man or beast, herd or flock, is to taste anything at all. They must not eat or drink water. Furthermore, both man and beast must be covered with sackcloth, and everyone must call out earnestly to God. Each must turn from his evil ways and from the violence he is doing. Who knows? God may turn and relent; He may turn from His burning anger so that we will not perish.

Then God saw their actions—that they had turned from their evil ways—so God relented from the disaster He had threatened to do to them. And He did not do it. (Jonah 3:1-10)

It is not too late for you. Now is the time to repent as an individual, and for the people of America to repent, as a nation.

Come, let us return to the Lord.
For He has torn us,
and He will heal us;
He has wounded us,
and He will bind up our wounds.
He will revive us after two days,
and on the third day He will raise us up
so we can live in His presence.

One thought on “The Roaring Sea and Waves”