When a Dutch cybersecurity researcher disclosed last month that Chinese security contractor SenseNets left a massive facial recognition database tracking the movements of over 2.5 million people in China’s Xinjiang province unsecured on the internet, it briefly shone a spotlight on the alarming scope of the Chinese surveillance state.

But SenseNets is a symptom of a much larger phenomenon: Tech firms in the United States are lending expertise, reputational credence, and even technology to Chinese surveillance companies, wittingly or otherwise.

The discovery suggests SenseNets is one of a number of Chinese companies participating in the construction of a technology-enabled totalitarian police state in Xinjiang, which has seen as many as 2 million Uighurs placed into “re-education camps” since early 2017. Eyewitness reports from inside the camps describe harsh living conditions, torture, and near constant political indoctrination meant to strip Uighurs of any attachment to their Islamic faith. Facial recognition, artificial intelligence, and speech monitoring enable and supercharge the Chinese Communist Party’s drive to “standardize” its Uighur population. Uighurs can be sent to re-education camps for a vast array of trivial offenses, many of which are benign expressions of faith. The party monitors compliance through unrelenting electronic surveillance of online and physical activities.

The concept of “prison” has changed enormously in the last decade, as China’s ancient totalitarian impulse, the absolute rule of the god-emperor over his subjects, is brought into the modern age.

China’s already formidable police state has been upgraded using big data, machine learning, face recognition technology and artificial intelligence into a fearsome cyborg of state control. The Chinese Communist Party has given birth to the world’s first high-tech digital dictatorship. China has always been the leader in Global Government, with their failed One Child Policy and their new Social Credit System. 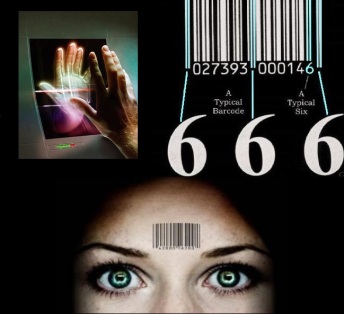 …digital identity — the set of electronically captured and stored attributes and credentials that can uniquely identify a person — places control in the hands of the individual. If properly designed, digital identity can be portable (retrievable without reliance on a piece of paper), persistent (interoperable across institutions), private (only relevant information needs to be disclosed), and personal (uniquely linked to the individual).

Meanwhile, the UN High Commission on Refugees committed this week to piloting this type of user-owned identification for their beneficiaries — some of the people who could benefit from it most. And The Rockefeller Foundation, which is providing financial support to ID2020, led a discussion on the role of philanthropy in helping to finance this work.

ID2020 aims to have run multiple demonstration projects by 2020, with each providing valuable data on the costs for implementation, the legal and regulatory hurdles posed in different countries and populations, and the key incentives that drive adoption.

It’s a bold vision, but it’s not a crazy one. And it could change the lives of billions — mine, yours, and those of many more living around the world.

The global powers have determined that national sovereignty is destined to fail. We already see this happening with the economic collapse, well under way. With governments crippled and devastated, and failed markets and banks, a “New World Order” will be the only solution offered, and then the Mark of the Beast will rise from the ruins of internationally failed economies.

We will then live on a Prison Planet. 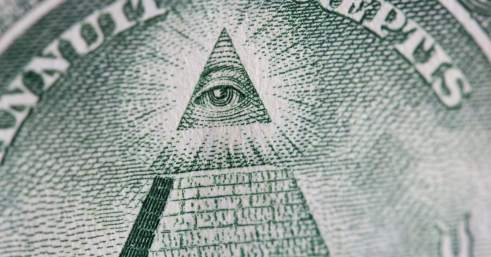 The people are naturally rebelling against the corruption of control. The past few months have seen a massive surge in protests globally. From the streets of Hong Kong to La Paz, Port-au-Prince, Quito, Barcelona, Beirut and Santiago, there is a huge wave of people taking to the streets to exercise their right to protest and demand change from those in power.

A common thread throughout these protests has been an extremely harsh response from the state, which in many instances have amounted to gross violations of human rights. Signs of abuse and violations at protests are rampant in Bolivia, Lebanon, Chile, Spain, Iraq, Guinea, Hong Kong, the UK, Ecuador, Cameroon and Egypt.

It is worthwhile to look back in Bible history, to get some perspective on persecution. The trials of Paul and Silas can show us the proper attitude during false imprisonment:

Once, as we were on our way to prayer, a slave girl met us who had a spirit of prediction. She made a large profit for her owners by fortune-telling. As she followed Paul and us she cried out, “These men, who are proclaiming to you a way of salvation, are the slaves of the Most High God.” And she did this for many days. 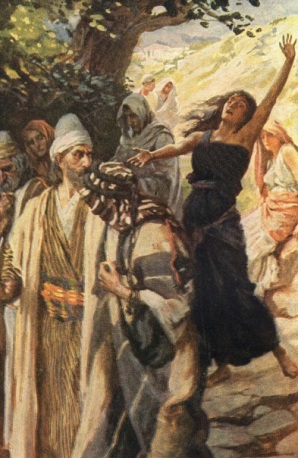 But Paul was greatly aggravated and turning to the spirit, said, “I command you in the name of Jesus Christ to come out of her!” And it came out right away.

When her owners saw that their hope of profit was gone, they seized Paul and Silas and dragged them into the marketplace to the authorities. Bringing them before the chief magistrates, they said, “These men are seriously disturbing our city. They are Jews and are promoting customs that are not legal for us as Romans to adopt or practice.”

Then the mob joined in the attack against them, and the chief magistrates stripped off their clothes and ordered them to be beaten with rods. 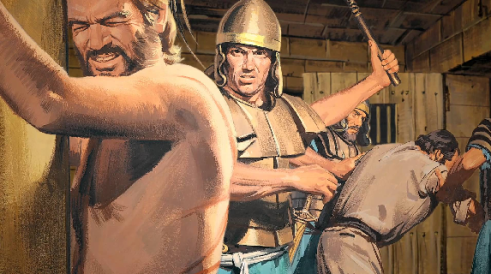 After they had inflicted many blows on them, they threw them in jail, ordering the jailer to keep them securely guarded. Receiving such an order, he put them into the inner prison and secured their feet in the stocks. 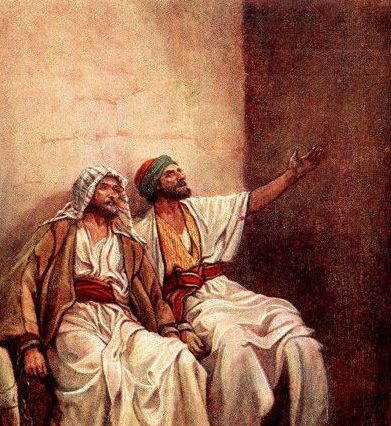 About midnight Paul and Silas were praying and singing hymns to God, and the prisoners were listening to them. Suddenly there was such a violent earthquake that the foundations of the jail were shaken, and immediately all the doors were opened, and everyone’s chains came loose. When the jailer woke up and saw the doors of the prison open, he drew his sword and was going to kill himself, since he thought the prisoners had escaped. 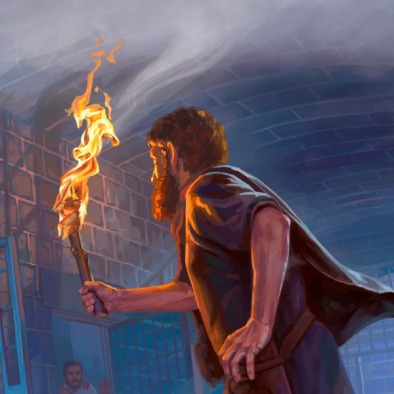 But Paul called out in a loud voice, “Don’t harm yourself, because all of us are here!”

Then the jailer called for lights, rushed in, and fell down trembling before Paul and Silas. Then he escorted them out and said, “Sirs, what must I do to be saved?” 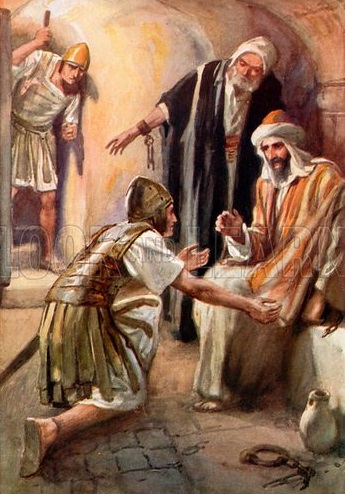 So they said, “Believe on the Lord Jesus, and you will be saved—you and your household.” Then they spoke the message of the Lord to him along with everyone in his house. He took them the same hour of the night and washed their wounds. Right away he and all his family were baptized. 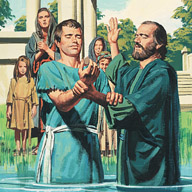 He brought them into his house, set a meal before them, and rejoiced because he had believed God with his entire household. (Acts 16:16-34)

There are Paul and Silas, in prison at midnight, singing praises, which were probably Psalms 113 through 118. Those six Psalms, which every devout Jew would no doubt know by heart, comforted them while their bodies were still bleeding and tortured in the stocks, and they made the prison wails resound with their song.

The sufferings of these two witnesses of Christ are the beginning and the type of numberless martyrdoms which were to flow upon the Church from the same source. Ironically, although they were in prison, they were free. It was the slave girl who had a spirit of prediction who was imprisoned, along with her owners. It was the entire Roman system that was imprisoned:

They promise them freedom, but they themselves are slaves of corruption, since people are enslaved to whatever defeats them. (2 Peter 2:19)

Because of the simple faith and obedience of Paul and Silas, the slave girl was freed from a demon, the prisoners were witnessed to, and the jailer with his household were saved!

In these End Times, we need to keep in mind that corruption is the natural order of things in this fallen world:

If you see oppression of the poor and perversion of justice and righteousness in the province, don’t be astonished at the situation, because one official protects another official, and higher officials protect them. The profit from the land is taken by all; the king is served by the field. (Ecclesiastes 5:8-9)

Human government has always been a predator/prey relationship, but as Christians we can use persecution as an opportunity to witness.

A world-changing way we witness is through giving the Lord thanks and praise.

Do not trust in nobles,
in man, who cannot save.
When his breath leaves him,
he returns to the ground;
on that day his plans die.

Happy is the one whose help is the God of Jacob,
whose hope is in the Lord his God,
the Maker of heaven and earth,
the sea and everything in them.
He remains faithful forever,
executing justice for the exploited
and giving food to the hungry.
The Lord frees prisoners.

The Lord opens the eyes of the blind.
The Lord raises up those who are oppressed.
The Lord loves the righteous.

The Lord protects foreigners
and helps the fatherless and the widow,
but He frustrates the ways of the wicked. (Psalm 146)