Foolish man! Are you willing to learn that faith without works is useless? (James 2:20)

Grace vs. works has been a debate for centuries. It’s not surprising that man feels compelled to earn salvation on the basis of works, not by grace.

The Council of Trent on Justification (Canon 12) states: “If anyone says that justifying faith is nothing else than confidence in divine mercy [grace], which remits sins for Christ’s sake, or that it is this confidence [faith] alone that justifies us, let him be anathema [cursed]”. This infers that we merit grace and eternal life only through sacrificial works.

In Islam, the Muslim attains forgiveness through Allah’s favor and works: “To those who believe and do deeds of righteousness hath Allah promised forgiveness and a great reward” (Surah 5:9). Only by good works outweighing bad works and by the will of Allah can a Muslim be forgiven his sins and gain access to his paradise. “Then those whose balance [of good deeds] is heavy, they will be successful. But those whose balance is light, will be those who have lost their souls; in hell will they abide” (Qur’an 23:102-103).

Salvation by works seems right in the eyes of man. One of man’s basic desires is to be in control of his own destiny, and that includes his eternal destiny. Salvation by works appeals to man’s pride and his desire to be in control. Being saved by works appeals to that desire far more than the idea of being saved by faith alone. Also, man has an inherent sense of justice. Even the most ardent atheist believes in some type of justice and has a sense of right and wrong, even if he has no moral basis for making such judgments. Our inherent sense of right and wrong demands that if we are to be saved, our “good works” must outweigh our “bad works.” Therefore, it is natural that when man creates a religion it would involve some type of salvation by works.

Because salvation by works appeals to man’s sinful nature, it forms the basis of almost every religion except for biblical Christianity. Proverbs 14:12 tells us that “there is a way that seems right to a man, but its end is the way of death.” Salvation by works seems right to men, which is why it is the predominantly held viewpoint. That is exactly why biblical Christianity is so different from all other religions—it is the only religion that teaches salvation is a gift of God and not of works. “For it is by grace you have been saved, through faith—and this not from yourselves, it is the gift of God—not by works, so that no one can boast” (Ephesians 2:8–9). 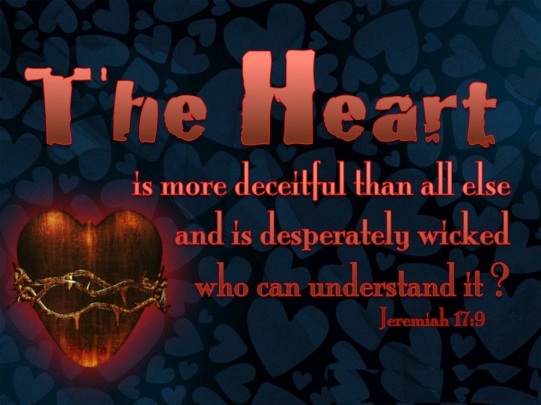 Another reason why salvation by works is the predominantly held viewpoint is that natural or unregenerate man does not fully understand the extent of his own sinfulness or of God’s holiness. Man’s heart is “deceitful above all things, and desperately wicked” (Jeremiah 17:9), and God is infinitely holy (Isaiah 6:3). The deceit of our hearts is the very thing that colors our perception of the extent of that deceit and is what prevents us from seeing our true state before a God whose holiness we are also unable to fully comprehend. But the truth remains that our sinfulness and God’s holiness combine to make our best efforts as “filthy rags” before a holy God (Isaiah 64:6; cf. 6:1–5). 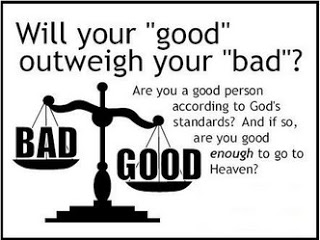 The thought that man’s good works could ever balance out his bad works is a totally unbiblical concept. Not only that, but the Bible also teaches that God’s standard is nothing less than 100 percent perfection. If we stumble in keeping just one part of God’s righteous law, we are as guilty as if we had broken all of it (James 2:10). Therefore, there is no way we could ever be saved if salvation truly were dependent on works. 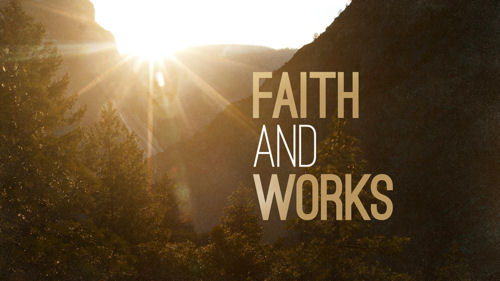 Another reason that salvation by works can creep into denominations that claim to be Christian or say they believe in the Bible is that they misunderstand passages like James 2:24: “You see then that a man is justified by works, and not by faith only.” Taken in the context of the entire passage (James 2:14–26), it becomes evident that James is not saying our works make us righteous before God; instead, he is making it clear that real saving faith is demonstrated by good works. The person who claims to be a Christian but lives in willful disobedience to Christ has a false or “dead” faith and is not saved. James is making a contrast between two different types of faith—true faith that saves and false faith that is dead. 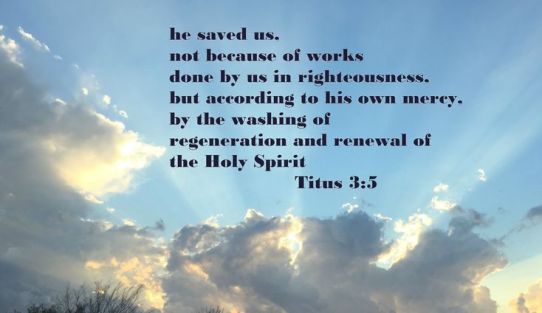 There are simply too many verses that teach that one is not saved by works for any Christian to believe otherwise. Titus 3:4–5 is one of many such passages: “But when the kindness and the love of God our Savior toward man appeared, not by works of righteousness which we have done, but according to His mercy He saved us, through the washing of regeneration and renewing of the Holy Spirit.” Good works do not contribute to salvation, but they will always be characteristic of one who has been born again. Good works are not the cause of salvation; they are the evidence of it.

While salvation by works might be the predominantly held viewpoint, it is not an accurate one biblically. The Bible contains abundant evidence of salvation by grace alone, through faith alone, in Christ alone (Ephesians 2:8–9).

The Greek word for joy is chara, derived from the word charis, which is the Greek word for grace. In other words, joy is produced by accepting God’s gift of grace. “…Even now you are happy with a glorious, inexpressible joy. Your reward for trusting him [God] will be the salvation of your souls. This salvation was something the prophets wanted to know more about. They prophesied about this gracious salvation prepared for you… (1 Peter 1:8–10).

As we’ve seen, even though we are saved by grace, good works show God what is really in our hearts. Since works are simply the outward manifestation of what we think inside, both our words and our works are excellent indicators of how pure our hearts are (Matthew 12:33-37).

Good works also set positive examples to others. People take notice of the good things that others do, even if they themselves don’t necessarily do good. In fact, God’s people are encouraged to respond to wrongs done to them by doing good (Romans 12:14, 17-21)!

Jesus emphasized that good works not only set a positive example to others, they also glorify God and His way of life (Matthew 5:14-16). The apostle Peter wrote that the day will come when people will remember the good works and good examples God’s people have done, and those good things will help them accept God’s way of life (1 Peter 2:12).

And even though eternal life is a gift of God’s grace, the role we will have in eternity will be partly determined by our works.

Notice the words of Jesus Christ:

“For the Son of Man will come in the glory of His Father with His angels, and then He will reward each according to his works” (Matthew 16:27).

“And behold, I am coming quickly, and My reward is with Me, to give to every one according to his work” (Revelation 22:12).

Yes, the Bible is clear—works are important!

Send any comments, suggestions, or prayer requests to raptureandendtime@gmail.com

Behold the signs of the times . IF we do that , We would clearly see this ol world is running out of time .
The COMING of the glorious KING does indeed draw nigh .
Now let all that draws breath praise the glorious Lord .

Not by works lest any boast!!

ONE WORKS has always been Gods WAY for a mans soul to hope to enter heaven.

THAT ONE WORKS? BELIEF in God and His Word.

ONE SERVICE has always been Gods WAY for a mans soul to enter heaven.

THAT ONE SERVICE? WILLINGNESS of a man to Bodily DIE “for” his Belief in God and His Word.

One thought on “Salvation in the Last Days: Working Your Way to Heaven?”