In the book of Matthew, we see Jesus teaching the Apostles that the Tribulation, and his Rapture of the bride will be linked to a certain generation:

Now learn this parable from the fig tree: When its branch has already become tender and puts forth leaves, you know that summer is near. So you also, when you see all these things, know that it is near, at the doors! Assuredly, I say to you, this generation will by no means pass away till all these things take place.
(Matthew 24:32-34).

We believe that this generation started when Israel (often Biblically symbolized as a fig tree) was reestablished as a nation in 1948 after 1,900 years of dispersion, persecution and oppression. The reason we think this is the last generation is that the Rapture, Tribulation and Second Coming require the existence of the nation of Israel.

A Biblical generation is defined as 70 years in Psalm 90:10: The days of our lives are seventy years.

If the Rapture is imminent, what are the facts on the ground? Are there current events point to such a momentous occasion, or is this wishful thinking?

UNITED NATIONS (Reuters) – The United States declared at the United Nations on Tuesday it was “ready to talk” with Palestinian President Mahmoud Abbas, who rejected U.S.-led Middle East peace efforts as “impossible” after Washington’s recognition of Jerusalem as Israel’s capital.

During a rare U.N. Security Council address, Abbas instead called for an international conference to be held by mid-2018 to kick-start the stalled peace process with Israel and create a “multilateral mechanism” to oversee it. He left the chamber before U.S. Ambassador to the United Nations Nikki Haley spoke.

The US embassy will move from Tel Aviv to Jerusalem by May 14, in honor of the 70th anniversary of Israel’s declaration of independence, according to Minister of Transportation and Intelligence Israel Katz. 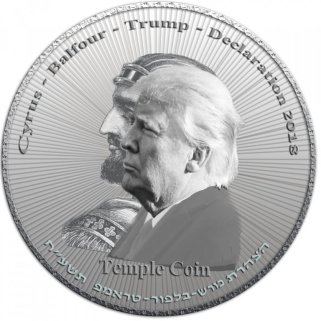 Temple organizations have issued a half-shekel coin, the likes of which the Torah mandates every Jewish male must donate to the Temple, with a weight of 9.5 grams in real silver.

On the facade of the coin is a picture of the Temple with the inscription “Half Shekel.” On the other side is the figure of US President Donald Trump, alongside Cyrus, King of Persia, who made the building of the Second Temple possible. Below them is the inscription, “Cyrus – Balfour – Trump – Declaration 2018.”

The producers of the coin say that it is in high demand abroad. Prof. Hillel Weiss, Chairman of the organization “Hamikdash Betzion” (The Temple in Zion), says that the motivation to embed the image of the President of the United States on the coin is gratitude for his support of Israel and especially for the recognition of our sovereignty over Jerusalem.. “This is a historic act for which the Jewish people is grateful,” says Weiss, who believes that the declaration sets off a process at the height of which the Temple will be rebuilt.

In a tweet, Israeli Ambassador to the US Ron Dermer compared the move to late former President Harry Truman’s 1948 recognition of the newly-established State of Israel.

As we can see, current events are indeed pointing to an imminent Rapture! Knowing this fact, what is an on-fire Christian to do?

Ask of Me, and I will give You the nations for Your inheritance, and the ends of the earth for Your possession.

Ours is a global ministry with a mission of reaching the lost and equipping the saints in seven of the world’s largest metropolitan areas. Our vision is to help bring the Kingdom of Heaven to Earth and be a part of the greatest revival in the history of the Church.

Today three out of every four people live in a city. We began this ministry by praying for evangelism and revival in one of the 7 target metropolitan areas each day. Feel free to join us and incorporate intercession for the salvation of the people in these cities into your daily prayers:

There are millions of people in these 7 mega-cities that need Jesus as Savior and Lord.  Pray for the Word of God to go forth and then the Hand of God through the Holy Spirit to move on individual lives to bring about the GREAT END TIME HARVEST!  How wonderful to be a part of this WONDER-FULL ministry!

“Go therefore and make disciples of all the nations, baptizing them in the name of the Father and of the Son and of the Holy Spirit, teaching them to observe all things that I have commanded you; and lo, I am with you always, even to the end of the age.”

* Pray for His Light to emanate throughout each province to bring about His accomplished Word!!!

* Pray that His breath blows and ignites the flames of the Holy Spirit through the hearts of men, women, and children!!!

* Pray for your angels to be released to do the warfare in the heavens to bring about the will of the Lord through the prayers of the saints!!!

Jesus said to them, “My food is to do the will of Him who sent Me, and to finish His work. Do you not say, ‘There are still four months and then comes the harvest’? Behold, I say to you, lift up your eyes and look at the fields, for they are already white for harvest!
(John 4:34-35) 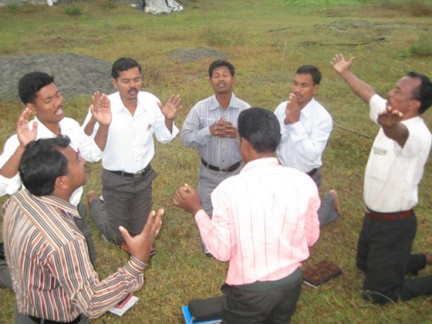 Ask of Me, and I will give You
The nations for Your inheritance,
And the ends of the earth for Your possession.